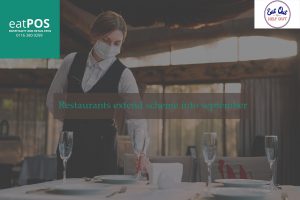 Restaurants will continue to offer the Eat Out to Help Out scheme in September, funded independently, because of the schemes success. Latest Treasury figures show diners used it more than 64 million times in the first three weeks.

The Eat Out to Help Out scheme was aimed to revive the hospitality industry after sit in operation was stopped due to the Covid-19 global pandemic. With more than 84,000 restaurants having signed up to the government’s scheme, business owners were eager to get back to normality. Business owners including some of our very own clients have said the scheme has helped tremendously to increase revenue, in turn businesses are taking it upon themselves to incentivise consumer spending in the industry by extending the scheme.

The scheme began on 4th July, and in the first three weeks it was used more than 64 million times – equivalent to nearly every person in the country dining out. The government set aside 500 million to pay for it, and restaurants apply to claim the money which business owners say is in their account within 3-5 days. Linsey Scott who runs Mason Belles Kitchen in Dunblane stated it’s been “absolutely brilliant for us” and intend to independently carry the offer on through September.

The impact of the scheme:

But the industry has not all seen it as a progressive step towards post pandemic recovery. “I want it to end” says Amy Erkin, who works in a Norfolk pub. She says customers have become increasingly aggressive during the scheme, adding that customers have the attitude that they’re “coming to help you out” and are subsequently tipping less.

It’s been a turbulent year and uncertainty across the hospitality industry has become a norm. Businesses are now forecasting being down in revenue by 25-30% throughout the rest of the year, Spanish City’s operation director added “it’s still a very nervous time for the industry”. Some restaurants are expecting a slow September with data showing as it stands only 27% of consumers feeling safe to eat in a restaurant, and consumers such as Amy Erkin stating they will be “eating at home probably for the whole of September”.

An industry in crisis, about 80% of hospitality businesses stopped trading in April & 1.4 million workers were furloughed which is the highest proportions of any sector according to government data. A third of restaurants and bars have still not reopened despite lock-down easing, as there is fear of spreading the virus.

The Treasury has not said the scheme will be extended, despite the demand for an extension, stating “Part of the popularity is precisely because it is a time-limited scheme”. It said the scheme compliments an array of support that stretches beyond August, which will include VAT cuts to 5%, business rates relief & billions in tax deferrals and loans.

Some businesses may say it’s been a little too successful with businesses (around 700) taking themselves off the scheme due to overcrowding and difficulties enforcing social distancing. For many people in the hospitality industry the scheme has been a ray of light in what people may call unprecedented times

We are committed to helping customers through these unpredictable times and we are constantly innovating to provide you the best experience and most seamless integration within the hospitality industry. For more information, please visit here, fill out the contact form today and one of our helpful consultants will guide you on our all in one solution, and provide you with the insight to increase efficiency within your operation.

The Benefits of Having Integrated Systems